Forth Valley College has once again taken an active part in the international 16 Days of Action campaign that calls for the elimination of violence against women and children.

In the college more than 100 students have taken part in a conversation event to explore how students can raise awareness of the issues of violence against women.  The FV Student Association have been actively involved in a social media campaign and events across each campus and the Learning Resource Centres created visual displays and book lists to promote the campaign.

Students have been leaving messages of hope and freedom on hand walls (in Falkirk), and thumb trees (in Alloa), on balloons (in Stirling) and on luggage tags in the LRCs. The LRC in Falkirk also displayed the messages of freedom for all to see.

As many as 1 in 4 women will experience some form of domestic abuse at some time in their life with similar figures for rape, sexual assault and childhood sexual abuse.

This is an issue that affects women’s participation in both education and employment opportunities.

The Forth Valley campaign encompassed a variety of events for practitioners and the general public including events at local libraries and football clubs. 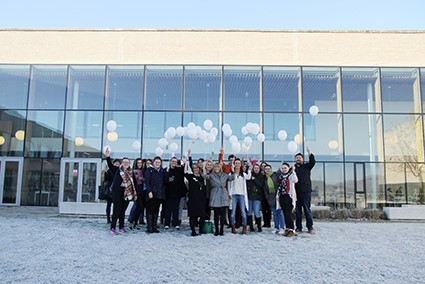